Here are some photo's of Kikkos first and stunning litter of 7 pups.  5 Girls and 2 boys

7/3/20 Update:  Today was the frist of the three week old visits which coincided with the puppies first attempts at solid food. I'm not sure who had more food on them. Out new puppie owners or the puppies.

19/3/20 Update: Well life is very very busy, the puppies spend their days in the paddling pool in our lounge and sleep in the whelping box next to our bed. They are starting to show interest in the outside world and once they learn to climb outside of the paddling pool they will be moving to the kitchen. They are on three solid meals a day and 3/4 mummy meals.

Orange collar, aka Misty (Moon) is a girl and was the first born on the 17th February (which was Su's birthday!).

With Kikkos contractions not producing the first pup quite as quickly as we would have liked we played safe and took her to our vets.  When we got there, a lovely family were there with their 15 yr old Lab, Misty.  Kikko stole their place in the queue so we thought it was only fair that when kikko's first arrived that we named it after old Misty that was patiently pacing the waiting room for her turn!

The first boy of the litter, Avneet was also delivered (naturally) at the vets.

Blues temporary name is Avneet, after the vet who kindly stayed late (along with the other staff) to help make sure all was well with Kikko before she went home to complete her birthing.

Avneet has now left the Clayton vets for a move to New Zealland so we thought it would be a nice thing to name this pup after him.

Angel,(which is just her temporary puppy name) was the first born at home as new mum Kikko got into the swing of things.

Barely (Mow) is a stunning girl and was keen to join the party being borm only six minutes after Angel!

We have not chosen their permanent Kennel Club Names yet, but as we do we'll update the page.  For now she is just known as Barley.

Lime Collar has a temporary name of Rhonda whilst she is with us.

Born 5th she is named after one of Su's teenage haunts.  She is a strong girl, being the equal biggest of the litter when born and one of the slightly darker.

Rose (and Crown) was the last of the girls to be born.

She is light in colour (so far) and very chilled (again so far!)

The last to arrive, but by no means a runt was Dragon (Geaorge and).

He was the equal largest at birth and is the only other male in the litter.

Register your interest in a puppy with us today 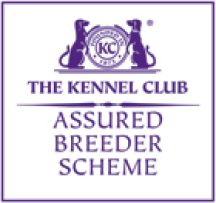